Sea level may rise a meter or two (more likely about half a meter) over the next century. Better get out of the way.

For those of you who have actually lived in areas that were at risk of significant storm surge you'll understand the ludicrous nature of the 'catastrophic sea level rise' claims bandied about by enviro-alarmists. A couple centimeters a year? Really? That's a catastrophe? Try eight meters in a matter of hours, wimps.

[Update: (I feel a bit sheepish for the lack of any intellectual content in this post, I'll blame it on the nice glass of Malbec I had the evening I posted it.) Here's an interesting paper that talks about hysteresis effects in ice-sheet dynamics. They present a graph showing change in ice volume in starting from no ice in a cooling climate, to change in ice volume starting with lots of ice in a warming climate. 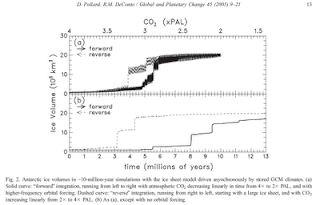 And here's a section from their conclusions (selectively edited with added emphasis to prove a point):

In our model with orbital forcing, CO2 levels need to rise slightly above 3xPAL [pre-industrial levels] to induce drastic retreat of pre-existing EAIS... however our current coupling method does not fully capture terrestrial ice-albedo feedback, which can affect Antarctic temperatures and precipitation just as much as orbital and CO2 changes... we have found that including [those effects] increases hysteresis... so that transitions occur at 3x and 4x PAL CO2, and are more sudden than those in Fig. 2a.

Oh my, it's worse than even the scientists thought... There's certainly a good press release lurking in that paragraph of the conclusion, and those transitions in the figure look down-right abrupt, we could be unwittingly teetering at the edge of a precipice. Here's another interesting part of the conclusion:

Due to the mass inertia of the ice sheet, climate fluctuations out of equilibrium with current ice must be maintained for several thousand years to have an appreciable effect on East Antarctic ice volume, and to induce transitions such as those described above. [...] However, our paleo-climatic simulations are not directly applilcable to the next ~5000 years, since the time scales of CO2 change are very different, and since we include full orbital variations. [...] In preliminary experiments [...] we find that CO2 levels must exceed 8xPAL to induce significant retreat from full ice-sheet conditions.

Oh, well, that's probably not going to make anyone's breathless climate-watch press release. Also, consider the scale on that graph, big-ticks at 10^6 years, those drastic and abrupt transitions are happening at time-scales on the order of the length of all recorded human history.]
Joshua Stults at 19:10
Share